Another summer has just begun and already “Texas Heat” is setting record-breaking power demand for ERCOT (Electric Reliability Council of Texas). This extreme heat is causing not only problems for utility companies, but also many other services such as emergency and medical. Is there any relief?

It is summertime and air conditioners are on full blast, pool pumps running long hours and it is extremely hot. From vacations to dining out, Americans are enjoying the summer. Record temperatures are being set, especially in Texas. Dallas, Ft. Worth, Abilene, San Antonio, Laredo, Galveston, and more, putting an even greater strain on ERCOT than normally in the summer. This, along with the lack of wind and an unusually extreme draught is causing outages all over the state. According to Reuters, ERCOT has thus far been able to avoid much-feared long term blackouts by asking both residents and businesses to curb their power usage. However, the question is: “With the hottest part of the summer still to come, will the Texas Grid hold up?”

We Texans know first-hand about the failures of the Power Grid. With last summer as a fresh reminder (see Sol-Ark blog titled “The Once Reliable Texas Grid Shutting Down in Summer”). Residents lost power in many areas. From sunup thru sundown the never-ending strain is constant. This is causing an increase in emergency calls for EMT’s to help, especially for the elderly. “We’re experiencing about double the heat-related call volume that we did last year,” MedStar operations supervisor John Hamilton told AccuWeather National Reporter Bill Wadell.

Here at Sol-Ark we know about the Texas heat firsthand. Besides the many employees that are Texas and nearby natives, many of the veterans have served tours in the desert as well. Surviving the heat has become a matter of survival for us. The heat is serious and dangerous if one is not careful. We just recently lost former running- back Marion Barber III to the heat. According to an autopsy report, Barber’s thermostat in his residence was set at 91 degrees with the heat set to on. The medical examiner ruled he “died of a heatstroke. Barber was known to exercise in sauna-like conditions.” 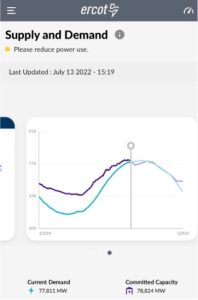 The graph above is a typical day lately for ERCOT here in Texas. We are all being affected by these extreme temperatures. The demand is getting worse as the heat intensifies. Outages and glitches have no discrimination, “I get a power glitch every day” says Tom Brennan, CTO Sol-Ark.

So, we at Sol-Ark believe that backup power is becoming a necessity.

Orders and questions being asked by customers is ever increasing. Our new Limitless 15K hybrid inverter has been the number one favorite across the U.S. (including Puerto Rico and Canada). The “Generator Eliminator” is in great demand, so education becomes a necessary to operate and install properly. We here at Sol-Ark have launched several programs to get our Installers and Distributors educated across America. Sol-Ark COO, CFO Bhawna “B” Oberoi has initiated a new “Mobile Learning Lab” to bring technical training and education to Distributors facilities and educate Installers. “Training is the key to any successful deployment of a power system. Just as in medicine, a doctor would never use a product without being educated on its proper use first, so why should we?”. Director of Systems & Training, Dylan Hillman, will personally travel around the country teaching Installers and Distributors the intricacies of backup power with Sol-Ark innovations. “I am chomping at the bit to bring our new van to a town near you! We have designed the Van to have a complete working install including AC and DC coupled solar panels, generator input, 30kwh of lithium batteries, main service panel, disconnects, and much more! Whether you’re looking to learn about the basics or dive into the details of installing our products we will be prepared, not only with knowledge, but also hands on learning examples.” – Dylan Hillman

Experts at Climate Central say that summers in Texas are becoming warmer and drier. Summers have steadily risen, each year, since 1975. That, along with the migration of many corporations to relocate their companies and employees to Texas, ERCOT will continue to have problems. Since we cannot control the weather, we can some control by having a Solar Battery System, which is the answer in solving the demand. Some utilities are also using Virtual Power Plants (VPP) for high demand times, so to mitigate brownout and blackouts in other states. Sol-Ark is also involved in those projects. We hope to do the same here for Texans. The engineers and Veterans at Sol-Ark will continue the innovations to reduce the cost of Solar Battery Systems and continue “Powering Families Through Life™” Sol-Ark 15K Hybrid Inverter on CEC List Plano, Texas: Sol-Ark’s recently-launched 15K Hybrid Inverter has been approved for the CEC list. With California being a huge market for solar and for ESS, this is sure to be a huge expansion opportunity for this new product. Previous products such as the 12K and 8K have been