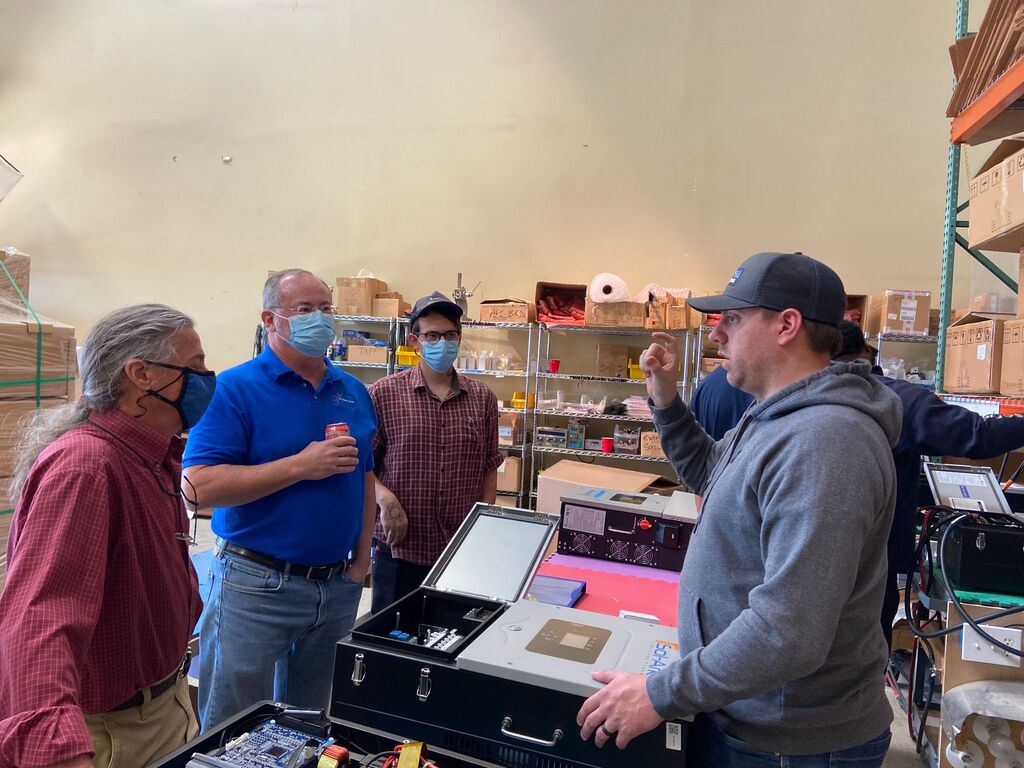 Solar energy engineering company Sol-Ark specializes in designing, testing, and supporting hybrid inverter systems. These units blend the aspects of a typical solar inverter with those of a battery inverter and can be used to sell energy back to the electrical grid, or to provide backup power should the grid fail.

The company began operations in 2011 as Tom Brennan – Chief Executive Officer and Chief Technology Officer – and his business partners were looking at investing in energy storage systems, specifically those that could provide backup power for lights and appliances like refrigerators and freezers. Upon not finding the desired systems, he and his engineers got together and devised a solution. “If we can’t find it, we will build it,” he states. The team got to work designing energy storage systems on their own, officially incorporating Sol-Ark in 2013 with small, all-in-one type designs. After three years, the company used the revenue to research and develop the 8K inverter, its eight-kilowatt, all-in-one hybrid inverter, “Sol-Ark’s main emphasis is on developing affordable energy storage solutions for both families and businesses.” which became one of the company’s signature products. It has since introduced the 12K, a twelve-kilowatt version, which has been a successful addition to its system and a further boost to its sales. Brennan identifies its inverters as being at the midpoint of costs among its other services because Sol-Ark’s main emphasis is on developing affordable energy storage solutions for both families and businesses. After a challenging first year, the company has enjoyed 300 percent growth annually for the past six years, securing both national and international awards. When the company would show up to trade shows in its early years, it would be shrugged off by others in the industry due to its lack of experience but Brennan knew what he wanted the company to accomplish, and today, Sol-Ark is generally regarded as the top competitor of other companies in the industry, a point of pride and a marker of respect for both Brennan and the company. The firm has also expanded beyond the inverter part of its services (due to the generally high cost of batteries and installations) into including load management and assisting its battery partners with both products and pricing, adding to its already considerable reputation. The business has two kinds of customers: the professional solo installer who wants simplicity, good support, and hardware reliability; and the end customer who just wants things to work as advertised and is not interested in the minutiae of how the product works, only in its efficiency and cost. From the beginning, the aim of the company was not to make a cheap and profitable product but one that is good by its standards first and relaying that value to its customers. for efficiency, transfer time, inverter output Brennan says, noting that the company is, “working on other solutions to bring costs down for other parts of the solution.” A decade later, the company still stands behind both its products and its customers. Sol-Ark is adamant in treating its customers like neighbors in its mission to bring affordable power resilience. The company fields calls from customers, installers, and distributors while helping design systems to be the most affordable. “We really care about our customers’ results because we put ourselves in their shoes,” Brennan says, citing the five-star reviews on energy marketplace website EnergySage as proof that this attitude is working.

Sol-Ark is a veteran-owned business with over half of the company owned by those who have served in the military, a practice that Brennan feels adds to its customer-first focus. He extols these workers, relating that their attitude has been extraordinary throughout the past ten years. The company was started by veterans and exists because of the efforts of veterans and reservists as engineers or in the production line. It values its employees, followed by customers, products, and profits; as a result, it experiences low turnover and high-quality service. Brennan regards the solar energy industry as being on a positive track since more people are interested in resilient power sources that will stand up to the forces of nature like those experienced in hurricane-vulnerable areas during the rainy season. There has been a large shift in the solar storage industry as utility companies eliminate or reduce dependence on coal and ‘peaker’ plants – the plants that run only when there is a high, or peak, demand – identifying these as depreciating assets in the energy industry.

Today, utilities and states throughout America are willing to rent energy storage systems up to sixty times a year when peak power is needed, through an idea called ‘virtual power plants.’ These systems combine energy from various distributed energy resources. Renting energy storage systems can be very lucrative for companies like Sol-Ark. Brennan reveals that such a contract, for the rental of a battery and inverter, can net up to $2,000 annually which will pay for the system itself in under a decade. In 2011, in an event that was similar to the recent weather-related blackouts in Texas, the temperature got so cold that natural gas flows from Houston to Dallas froze, leading to electric motor failure on the gas lines and, in turn, causing rolling outages. By the time the gas got to the area, there was not enough pressure in it for many of the standby generators to function; however, solar storage systems and battery inverters, which charge directly from the grid, were in better shape, demonstrating the usefulness and reliability of Sol-Ark’s technology. Thankfully, the company was not greatly affected by COVID-19 and pivoted into dealing with fleet management and remote monitoring to allow it to debug and solve its customer’s issues remotely so that no worker has ever had to travel to a customer site to fix an issue. As well, because it dedicated much of its revenue in its first few years to ensure it remained debt-free, to this day, it has yet to encounter any long-lasting financial difficulties. The biggest ongoing challenge for the company is in dealing with outgrowing its facilities. “We grew so fast that we couldn’t move,” Brennan says, adding that the company has spread over five buildings within the same area, putting some stress onto office staff members who must put up with a noisy and at-times cluttered work environment due to this. Sol-Ark’s primary goal going into 2021 is moving into its new 75,000-square-foot building that aims to house every part of the company from offices and production to order fulfillment. The company also will be moving its manufacturing from China to Texas and releasing five products this calendar year. While most competitors within the industry release new products on a three-to-four-year cycle, Sol-Ark averages a release every two to three years, a pattern that the company will continue beyond 2021. “We’re a small company that punches above our weight class,” Brennan concludes. “Our goal is to help innovate.”

Read what Installers and Homeowners are saying about Sol-Ark