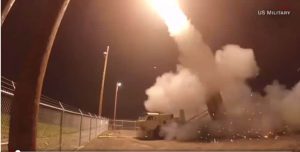 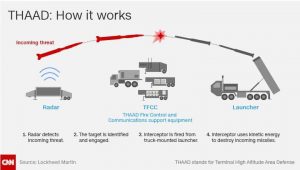 The Pentagon increases missile defense options to include some out of the box thinking.

As a result of numerous missile tests by North Korea Pentagon increases missile defense options. Along with congress, the pentagon has been scrambling to test the technologies we have and develop newer ones that can defuse this threat.  Many options are on the table including a space based missile defense program that is way in the future. The article below breaks down our defense strategy…it’s drawbacks and potential successes. As you read, just think of keeping your loved ones safe and praying for one another.

On Sunday the U.S. successfully intercepted a simulated intermediate-range ballistic missile using the Terminal High Altitude Area Defense (THAAD) system, following a successful test in May of a ground-based interceptor to successfully shoot down a U.S.-launched mock ICBM fired from Kwajalein Atoll in the Pacific.

These successes are technological firsts, and their designers deserve our kudos and thanks. The problem is that these ground-based systems only shoot down an incoming ballistic missile in its terminal phase, toward the end of its flight. That narrows the margin for error. If the interceptor misses or intercepts a nuclear-armed missile too close to a target like Honolulu or Los Angeles, the result could still be catastrophic.

But what if we can stop that missile before it leaves North Korean air space?

We need to intercept a North Korean missile in its much earlier boost phase. Large multi-stage rockets need high-thrust booster engines to get out the atmosphere, with the boosters then dropping away when the missile achieves orbit.

Destroying a missile at this early boost phase has many advantages. A ballistic missile generates the greatest heat at launch, making it easiest for long-range infrared sensors to detect. The early boost phase is also the slowest part of the launch, so the missile loses any advantage it might have in terms of speed in its later descent.

A boost-phase intercept (BPI) can’t be done from a ground or sea-based ballistic missile defense system like THAAD or the Navy’s Aegis: they can’t detect the launch soon enough. Our Missile Defense Agency is working on a BPI plan using high-energy lasers; but that technology is at least five years away.