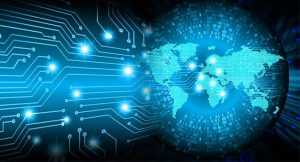 Cyber attacks threaten our power grid everyday. A  new strain of ransomware named Petya wreaked havoc on some of the most-established companies in Europe and North America on Tuesday. This was similar to the bug that froze hundreds of thousands of computers a month ago this is reported by.  New York Times and Reported by USA TODAY June 27 2017. We have been seeing the affects of these attacks due to Ransomware and other worms and viruses for years. Recently this is the go to weapon for most countries and groups who mean to do us harm. I almost wonder if they are not practicing on other small countries before trying it on the united states. Here is an article which talks about the idea that “The Power Grid Is Far More Vulnerable to Cyber Attacks Than Most People Realize”

These cyber attacks have been going on since 2003 so some people think it’s just a part of life. We just had another cyber attack using malicious data scrambling software that crippled the What they don’t realize is that it has been progressing and our infrastructure is getting older. The way that the electrical grid is set-up right now, we are only as strong as the least common denominator. To your surprise not all parts of the electric grid conglomerate is composed of corporates like PG&E or Duke energy etc… Furthermore

Electricity is delivered to consumers through a complex network

Electricity is generated at power plants and moves through a complex system, sometimes called the grid, of electricity substations, transformers, and power lines that connect electricity producers and consumers. Most local grids are interconnected for reliability and commercial purposes, forming larger, more dependable networks that enhance the coordination and planning of electricity supply.

Any disruption in this complex process and you have a power outage. This can be caused by storms, cyber attacks or oven people using too much power.  We see this through our customers at when they purchase a Sol-Ark. Many don’t realize the amount of power they are using. It’s like having a bottomless bag of money when you have the electrical grid…at least that’s how most people treat it when they use power. It’s only when they get their bill, that they think about it. We educate our customers on how to size their Sol-Ark system so they can have power when the electrical grid fails. Learn on our website or call us for a consultation.