Texas Grid Failed, Why you Need Your Own Power Plant? 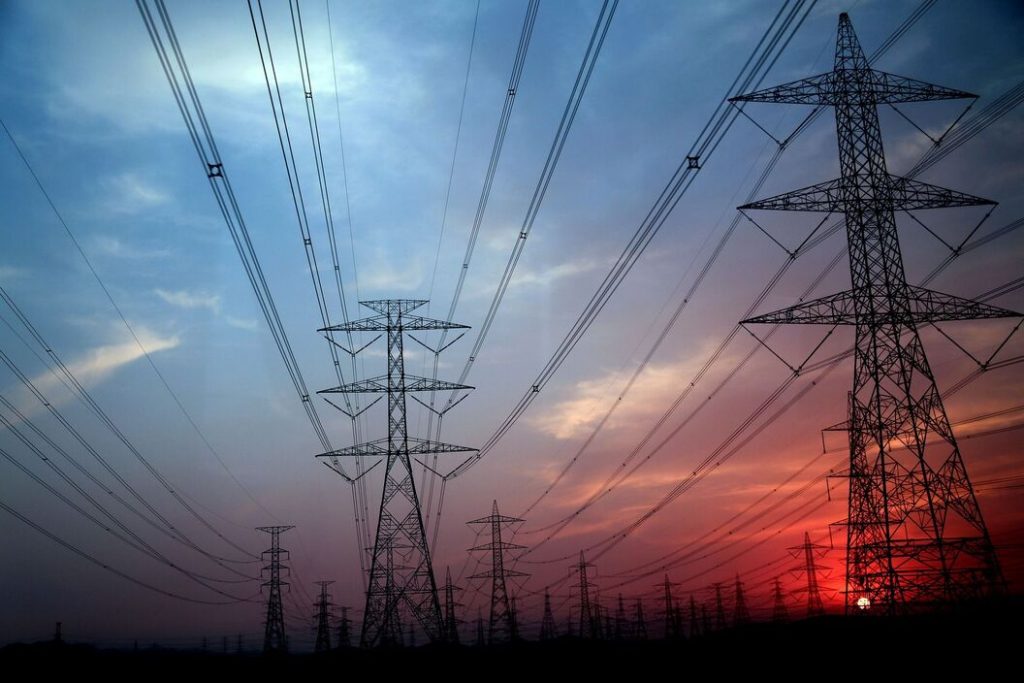 Texas Grid Failed, Why you Need Your Own Power Plant?

If you occupied one of the 4.5 million homes and businesses that suffered during the 2021 Texas power crisis, you don’t ever want to go through that again. While I was researching and reading accounts of tragedies and following the blame game, one thing was clear. This blog needed to focus on the facts and offer some helpful suggestions to help you with your power needs.

Many have concluded that the Texas Electricity Reliability Council of Texas (ERCOT) relied heavily on renewable resources, that when the huge frozen wind turbines couldn’t turn, it led to the collapse. Other have pointed fingers at the Texas Power grid being a lone ranger and thus couldn’t buy power from other states. Then there were others that said the Natural gas lines froze and couldn’t provide any energy support.  This made a great story for pointing fingers from both sides. The green energy sector believed, the Oil giant relied too much on thermal sources (coal, natural gas and nuclear) and it failed. The fossil fuel camp was equally vicious blaming the Texas’ dependence on wind and solar, while wind turbines froze.

So how are you to weed through this mess and decide what you can do to avoid it, prepare for it, or forget about it? Well, let’s list the facts by the numbers*:

Did natural gas really fail Texas? Well, it’s not that simple. Let’s follow the proverbial money. On the surface, natural gas really did pull through for us and actually ERCOT does not rely that much on the green subsidies to keep it running. On top of this utilities prefer to prioritize Wind over fossil fuels whether for a greener image or financial incentives. This leaves natural gas lines and other thermal plants sitting idle and incurring costs and dwindling margins. There are so many incentives to go green that no one wants to invest in the thermal infrastructure like in the northern states. Even if the money were there, Texas would have to come up with innovative ways to overcome its heat obstacle in the summers. You can’t use the same type of insulation for two different climates.

So, despite being disrespected and ousted by most of the country, these so-called dinosaurs (thermal energy sources) saved thousands of lives in my home state of Texas. Envision when the lights were out in your home while you and your family were sleeping by the natural gas fed fireplace keeping you warm. Did natural gas fail you? The fact is that we moved on to greener fuel sources neglecting the thermal infrastructure, using its energy when we had shortfalls and then finally, we asked it to carry the whole state and run a sprint. The traditional energy sources did what they could with the old infrastructure provided, otherwise it would have been so much worse.

Many people with whole home standby generators were taken off guard when they were unable to use their generators. Many areas did not have enough natural gas pressure to get gas to the residential whole home standby generators to function. In some areas there were intermittent outages where residents had natural gas but no electricity and visa versa. The aging infrastructure is not reliable to keep pumping natural gas to stand by generators, however the leading Generator makers such as Generac have seen a huge spike in orders. Generac is not alone; Briggs and Stratton, Kohler and Cummins also saw an increase in demand. Generac has a 6-month lead time and Briggs and Stratton has a 9-month lead time as the public remains uneducated about the failures of natural gas Generators in this situation.

In fact, this energy crisis was inevitable. The NERC’s 2019 Summer Reliability Assessment report found that ERCOT grid had one of the United States’ lowest anticipated reserve margins1. There are tremendous many people moving to Texas every year including businesses. While watching the ERCOT app (Fig 1) one can see the demand reaching capacity even days leading to the blackout which occurred at 2am February 15, 2021 (Fig 2). ERCOT did initiate rolling blackouts for businesses so families could have power in their homes as much as possible.  No one knows if it was too little too late but having a back-up option is imperative these days. 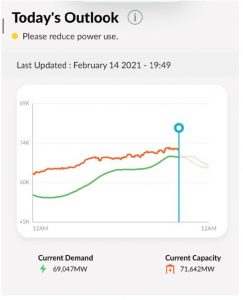 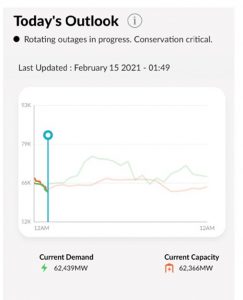 Texas Was Not Alone

No one talked about the two other major electrical grids that had similar shortfalls in energy delivery. Temperatures were even colder in parts of the Southwest Power Pool (SPP), a 14-state electricity system stretching from North Texas to the Canadian border. It was a similar situation in the Midcontinent Independent System Operator (MISO), a 15-state system going from Louisiana to the Canadian province of Manitoba. Neither MISO nor SPP was able to completely avoid the grips of the cold. Both were forced to sever electricity to customers in a bid to stabilize their grids. Basically, these types of outages are not an isolated incident. We’ve seen what havoc the fires in California have created with up to 500,000 homes without power at any given time.

What’s Your Plan for Your Business

What are your options to keep your business running in emergencies such as this? Well, at Sol-Ark we have our facilities backed up by our proprietary 12K Sol-Ark system which was implemented to combat peak demand charges and keep our promise for 7-day support. As many of the business owners know, the peak demand charges can sometimes break the bank. With the Sol-Ark you can program it to never go past that Peak Demand ceiling and avoid those $$ charges all together. If your business depends on IT services or hosting websites on servers, you may benefit from a Sol-Ark with its 4ms (No-Glitch) transfer time. A True UPS!

It was captivating to see the rolling blackouts on the Sol-Ark’s free monitoring system App (Fig 3 below)- You can see the dips in the power grid (Green) every 30 mins and the ESS system continuing to power the loads (Red) without wavering. That Red line is a good thing in this illustration.

What’s Your Plan for Your Family?

So, what can you do to keep your family safe next time? I used to have a whole house natural gas generator and then I too switched to a greener energy source. A few years ago, I added a Sol-Ark battery system (ESS) to my home. With the 30% tax credit by the feds and saving on electric bills, I was sold! The Sol-Ark also has the fastest (No Glitch) Transfer time, so I never have to reset my clocks after a power glitch. I have been so spoiled with the Solar power system that I don’t even know when the power is out.  Texas is a great state for solar power with long hours of sun most of the year. Don’t get me wrong, I still kept the generator because it will seamlessly power my home if I don’t have enough battery or sunlight. And if the natural gas pressure stays up. The Sol-Ark has an auto-start feature for my Generator which is not easily found in the market. I checked out other Solar battery system companies, even Generac’s Pwrcell, but none of them had this feature nor could they power my 3- & 5-Ton AC units. Furthermore, the Sol-Ark easily runs my furnace fan as long as natural gas keeps flowing and when that infrastructure fails, it will power my electric heating as needed.  This is my plan for now.

Take Aways to Help You in the Future: