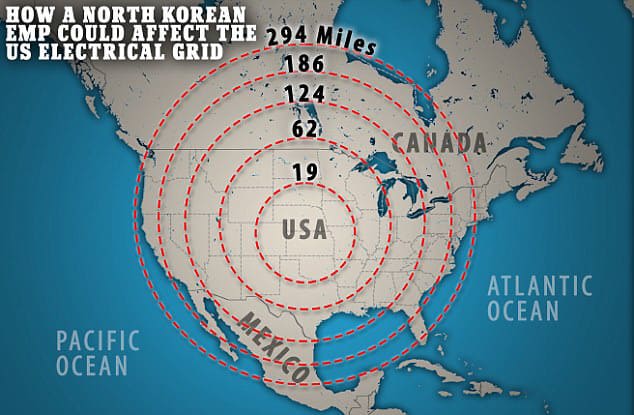 Here at the Home of the Sol-Ark EMP hardened solar generator, we bring you news that can affect the electrical grid. It is very sad that we have to keep talking about Electromagnetic Pulse Attack becoming a true threat. I would like to add that we do conduct tests to let you know what items can survive without the help of the Sol-Ark and give you solutions to overcome the looming EMP threat.

We have witnessed so much news in the recent months about North Korea’s disregard for the rest of the world. They have been ramping up their arsenal and exploded their largest ever nuclear bomb Sunday Sep 3 2017.  If you hear the rhetoric and propaganda in news seen inside North Korea, you can see why their people are going along with this crazy scheme. Vice News reports how skewed their reality really is. Basically they were invited to witness a great event(Birthday of the Founder) in North Korea. When they were there, Kim Jong Un launched a large missile to show strength to the world and also showed military might in a parade.  We don’t know how far he will go until his madness causes a warlike reaction from the US or UN.

Read More about it here.

Reported from Daily Mail Today Sep 4 2017 as we celebrate Labor Day. How North Korea could wipe out electrical networks across the US with a high-altitude EMP blast
North Korea warns of ‘super-powerful’ electro-magnetic pulse attack on US
The secretive state tested a 100-kiloton thermonuclear weapon on Sunday
That would be a ‘city killer’ bomb, five times larger than Nagasaki atomic bomb
But detonation in the high atmosphere could create devastating EMP attack
Potential to wipe out electrical grid over virtually all of the continental US.